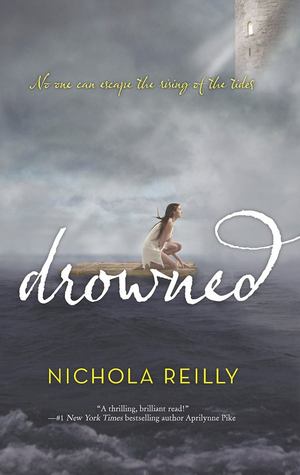 Naming Characters – the research, meaning behind, or method of choosing unusual character names.

Here’s a novel thing: I like to pick names for my characters that fit their personalities. I know, big shocker—most authors do that. I used to go on babynames.com and put in what I wanted the name to mean, and it would spit out a whole bunch of names that meant a certain thing, then I would just select the one I liked best.

In the world of DROWNED, the people have been removed from our civilization for a long time. They do not read anymore, they don’t have books or any means of writing, so over the years, language has disintegrated. Much knowledge has been lost, and many of the names have been cannibalized and altered, much like a sentence in a game of telephone. So a lot of the names are not real names at all; just things I came up with because they evoke an image or make a sound that fits the character.

At one point in DROWNED, the main character, Coe, wonders if a person’s name controls who he or she will become. The princess Star, after all, is heavenly. Tiam, the strong, capable boy, is named after Tiamat, a Mesopotamian goddess who controls the chaos of the sea. The goddess Tiamat “gives birth to the world”, and in many ways, gives birth to Coe’s world. Coe’s name is short for Corvina. She’s named after a “smelly, slimy, bug-eyed fish,” which she thinks is fitting, since she is strange-looking and considered the lowest of the low. There is another story behind how she got her name, but that comes later.

The ruler of the land, King Wallow, is a descendent of a doomsday prepper named Agnes Willow, who owned the land they now reside on. In a world where language has been lost, the ruling family’s name changed over time, without their knowledge, and perhaps they don’t even realize now what “Wallow” means. But the royals do wallow; they’re the most self-indulgent people you’ll ever meet.

I had fun naming the secondary characters, since I wanted to pull them from things that have existed in the past, but had somehow morphed in meaning and importance over time. Melame is a mean, older guy who minds the tide pools people wash in. “Melame” is an amalgam of Mean and Lame, because that’s what he is. Burbur is a very busy and important castle worker, used to high-traffic, very hardy, like Berber carpet. Cordon, the chef, is named as such because I can only imagine his ancestor’s favorite dish was Chicken Cordon Bleu. Xilia is a crazy lady, named that because it sounds very much like “sillier”. And she is silly. It’s hard not to hear the name “Mutter” and not think of an angry guy walking around with his head down, mumbling to himself. I also threw in other, more normal names, like Ana and Finn, because I figured that not all ordinary names would fall into the void.

I’m not usually married to the names I choose. Sometimes, a character will change over time and demand to me to be called something else. In that case, I will usually make the change later on. But in this book, Coe was always Coe, and Tiam always Tiam, and I can’t imagine them being called anything else.

Coe is one of the few remaining teenagers on the island of Tides. Deformed and weak, she is constantly reminded that in a world where dry land dwindles at every high tide, she is not welcome. The only bright spot in her harsh and difficult life is the strong, capable Tiam—but love has long ago been forgotten by her society. The only priority is survival.

Until the day their King falls ill, leaving no male heir to take his place. Unrest grows, and for reasons Coe cannot comprehend, she is invited into the privileged circle of royal aides. She soon learns that the dying royal is keeping a secret that will change their world forever.

Is there an escape from the horrific nightmare that their island home has become? Coe must race to find the answers and save the people she cares about, before their world and everything they know is lost to the waters.

Nichola Reilly is Cyn Balog’s post-apocalyptic fantasy-writing alter-ego. The first book in her series, DROWNED, will be releasing from Harlequin TEEN sometime in 2014, followed by a sequel, BURIED, in 2015.

Cyn Balog is a normal, everyday Jersey Girl who always believed magical things can happen to us when we least expect them. She is author of young adult paranormals FAIRY TALE (2009), SLEEPLESS(2010), STARSTRUCK (2011), TOUCHED (2012), and her most recent release: DEAD RIVER (2013).e. She lives outside Allentown, Pennsylvania with her husband and daughters.

She also writes under the pen name Nichola Reilly. Nichola Reilly is Cyn Balog’s post-apocalyptic fantasy-writing alter-ego. The first book in her series, DROWNED, will be releasing from Harlequin TEEN sometime in 2014, followed by a sequel, BURIED, in 2015.

Each tour stop is offering up a copy of DROWNED, and one winner will receive a fantastic Grand Prize Package including the following HarlequinTEEN titles: 2 copies of DROWNED as well as copies of RAIN, THE AFTERMATH, THE DARK WORLD and OCEANBORN. Please enter via the Rafflecopter form. Giveaway is open to US/Canada.